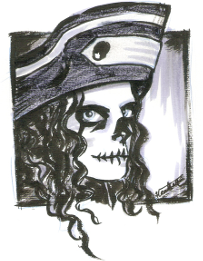 Here is a drawing of me that was done by a Friend a few years ago. It’s based on a photo from a year or two before that. So by my maths that means it from roughly… 2010. It’s not too far off what I look like really, though have since picked up a terrible beard thing.

I’ve done the school thing, mostly just about scraping through; I did well enough to get into uni, where I did a course on Games Technology. Some where along the line I must of grown up a bit as I managed to focus on putting the effort into getting 1st out of it.

I’ll keep this short. I like games; computer games, board games, card games, table top games. I enjoy reading, but tend to neglect it, recently enough I’ve really got into comics too. And of course, I enjoy programming; C++ is probably my strongest language, though for work I use Java so they’re about even. There’s a sprawl of other languages I’ve played with too.

If you feel the need to rant back at me, twitter is probably not a bad place to start; you can find me @thecoshman. Look, I even use it!

I also, of course, make use of Stack Overflow where I occasionally answer questions on a broad range of subjects, though mostly just use the chat feature.

If you fancy seeing some neglected projects have a peak at Github.

For those who care about such details, I have this site hosted via github pages. It uses a swanky system called Jekyll, it takes Markdown and converts it into a static HTML site that they (github) host. I might make a more detailed post about this at some stage, though there really isn’t much to it.

The ‘layout’ and all the liquid template stuff is mostly done by myself,

My theme is based off ‘Slate’ @jsncostello, I’m sure you can hunt down a copy for yourself if you want it. I have done some customisations to it, most I forget, it’s mostly subtle things; I’ve done tweaks like the gradients in the header and footer, adding css for in-line image things, colours of links et cetera.